How to draw an anime character 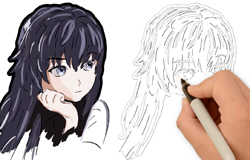 Anime is simply animation in Japanese, but usually when people say Anime they mean Japanese animation and/or Japanese characters. These are usually hand drawn or computer based animation and are famous for their vibrant colours and fantasy related background and stories. Manga is also used to describe this style of illustrations.

With the help of the video above you will learn how to draw an anime girl step by step.
Anime or Manga characters are easy to sketch and all have the same characteristics like big eyes, small nose, etc., so when you learn to draw this Anime or Manga girl you are familiarising  yourself with drawing other Anime characters as well.

The history of Manga illustrations is rich and comes from the 12 Century and even before. Back then the Manga characters were used as early comics, although what we know as Manga and/or Anime is related more to the animated films and TV series that were created in Japan in the sixties and won the imagination of the American and European audience and critics alike.

We hope you enjoyed our How To Draw an Anime Character video!