How to Draw Earthworm cartoon drawing step by step 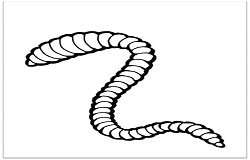 Earthworms are the tube shape worms that are mostly found in the phylum Annelida. The body of Earthworm will be round and it could easily flatten the tail part and these earthworms are great for the soil. They would turn it to keep the soil loose and helpful for staying fertile. Earthworms are also called as “Lob Worms” and “Night crawlers”. If you want to make Earthworm cartoon drawing then you cannot get better drawing tutorial than ours.


Earthworms need to stay the moist for moving the dirt through it. When the worm gets dry then it would dry. Most of the people used the Earthworms as the medicine for the stomach problems and tooth aches. Earthworm has been brought to the United States and it normally lived in the Europe.

Must read- How to draw Millipede

Earthworms does not have spine so that it would push itself through the dirt for getting around into the soil. Nowadays the Earthworms are much common and they could be seen in red and pink color. Earthworm measures that are separated into the pieces so it can move through soil. Earthworms eat dead things such as dead plants, animals as well as many other things that are rotted.

This simple tutorial about how to draw Earthworms will help you learn the easiest and simplest way that would automatically improve your skill. Earthworms are cute animals that do not have brain.
When you like to draw earthworm step by step then it would be a great option for drawing with great beauty.

This is going to be one easy Drawing tutorials to follow in the most enticing way since they don't have legs or arms and it would give you the chance to improve your skills amazingly. You can draw a simple worm with the cute and amusing techniques so that it would be easier to follow the below steps

For drawing the Earthworm, you need to start with the 2 curved lines that need to meet at a point. Get this easy drawing steps tutorial to have the best knowledge about the earthworm in the fantastic way.

Use 2 curvy lines for making an ‘S’ shaped line so that it acts as the tail of the earthworm. Since, Earthworm do not have any spinal cord, it would push itself towards the dirt for getting around.

Finish the body of the Earthworm with 2 lines that goes down to its finish round end. Earthworm’s body would be round so that you can easily flatten its tail part.

For making a pattern, you can easily draw the slight curved lines to its body. get the instant answer to make How to draw step by step procedure for drawing these cartoon diagram. Of course, you can add dark brown color your Earthworm with little red and pink colors around.

Now you can make the drawing cartoon the curvy shaped earthworm body to add hump or bump near mid-section of each worms body. The Earthworms are quite hearty looking critters and you can draw cartoon to give them a good impression.

I hope you like reading article on “How to draw Earthworm cartoon”.